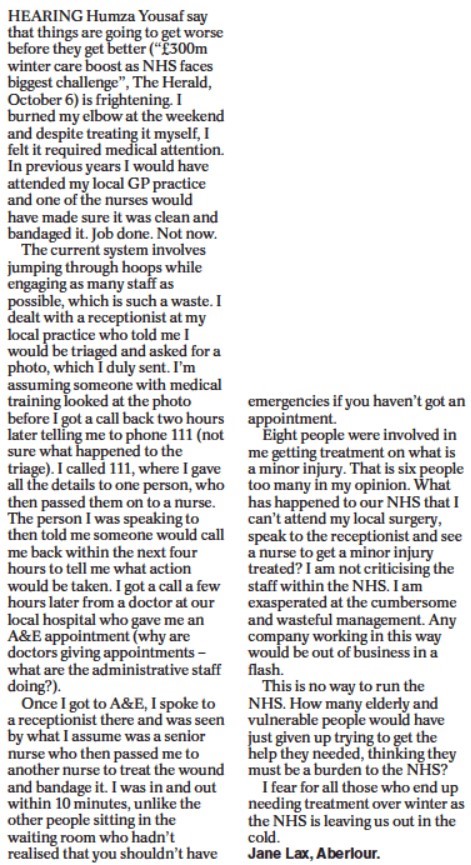 HEARING Humza Yousaf say that things are going to get worse before they get better (“£300m winter care boost as NHS faces biggest challenge”, The Herald, October 6) is frightening. I burned my elbow at the weekend and despite treating it myself, I felt it required medical attention. In previous years I would have attended my local GP practice and one of the nurses would have made sure it was clean and bandaged it. Job done. Not now. The current system involves jumping through hoops while engaging as many staff as possible, which is such a waste. I dealt with a receptionist at my local practice who told me I would be triaged and asked for a photo, which I duly sent. I’m assuming someone with medical training looked at the photo before I got a call back two hours later telling me to phone 111 (not sure what happened to the triage). I called 111, where I gave all the details to one person, who then passed them on to a nurse. The person I was speaking to then told me someone would call me back within the next four hours to tell me what action would be taken. I got a call a few hours later from a doctor at our local hospital who gave me an A&E appointment (why are doctors giving appointments -what are the administrative staff doing?). Once I got to A&E, I spoke to a receptionist there and was seen by what I assume was a senior nurse who then passed me to another nurse to treat the wound and bandage it. I was in and out within 10 minutes, unlike the other people sitting in the waiting room who hadn’t realised that you shouldn’t have emergencies if you haven’t got an appointment. Eight people were involved in me getting treatment on what is a minor injury. That is six people too many In my opinion. What has happened to our NHS that I can’t attend my local surgery, speak to the receptionist and see a nurse to get a minor injury treated? I am not criticising the staff within the NHS. I am exasperated at the cumbersome and wasteful management. Any company working in this way would be out of business in a flash. This is no way to run the NHS. How many elderly and vulnerable people would have just given up trying to get the help they needed, thinking they must be a burden to the NHS? I fear for all those who end up needing treatment over winter as the NHS is leaving us out in the cold. Jane Lax, Aberlour.

Help us expand our COP26 campaign and empower us to undertake significant forward planning for the Scottish council elections in 2022. Help pro-UK parties take seats (and influence and power) from the SNP. Donate by clicking the image to the right.

For evidence of the SNP/Greens environmental failures, CLICK HERE. 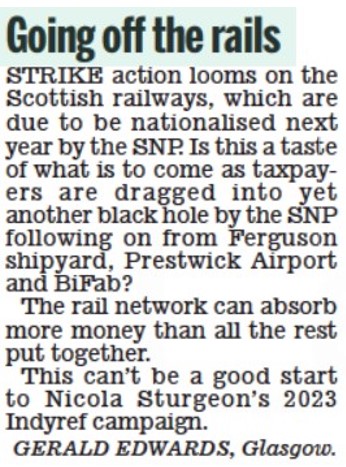 STRIKE action looms on the Scottish railways, which are due to be nationalised next year by the SNP Is this a taste of what is to come as taxpayers are dragged into yet another black hole by the SNP following on from Ferguson shipyard. Prestwick Airport and BiFab? The rail network can absorb more money than all the rest put together. This can’t be a good start to Nicola Sturgeon’s 2023 Indyref campaign. GERALD EDWARDS, Glasgow. 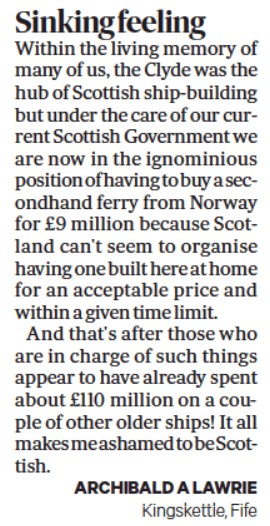 Within the living memory of many of us, the Clyde was the hub of Scottish ship-building but under the care of our current Scottish Government we are now in the ignominious position of having to buy a secondhand ferry from Norway for £9 million because Scot-land can’t seem to organise having one built here at home for an acceptable price and within a given time limit. And that’s after those who are in charge of such things appear to have already spent about £110 million on a couple of other older ships! It all makes me ashamed to be Scottish. ARCHIBALD A LAWRIE Kingskettie, Fife