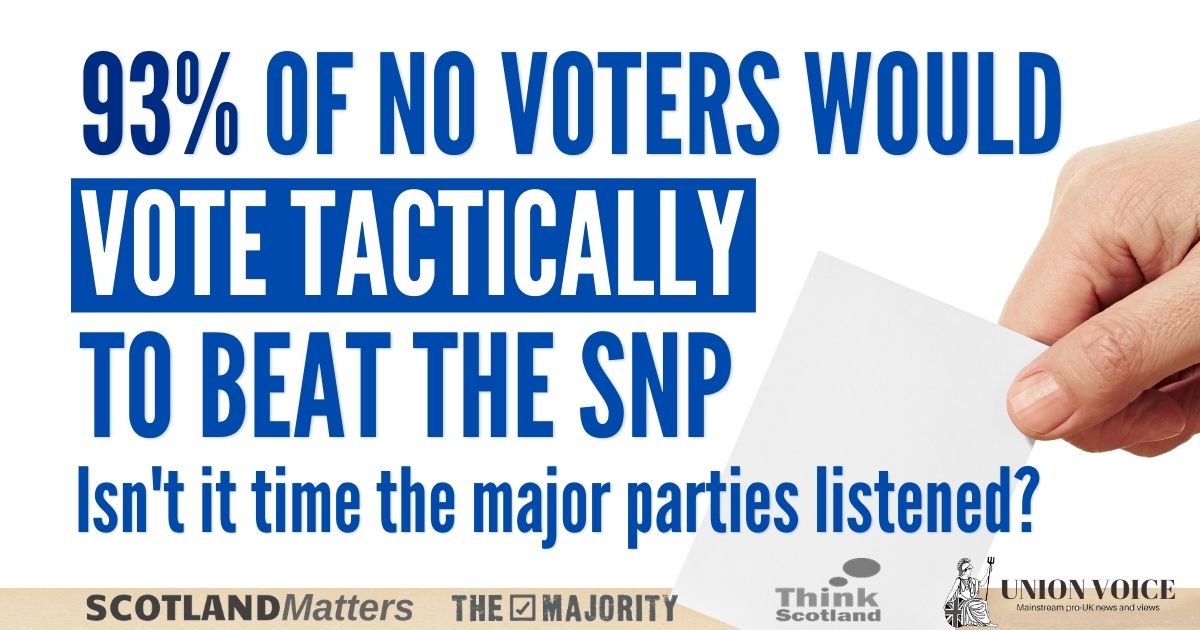 The poll found that 93% of pro-UK voters would tactical vote if the three UK opposition parties only fielded one candidate in each constituency.

Furthermore, 70% also say they will vote tactically for the best candidate to win in the constituency vote to defeat the SNP in May regardless.

The survey of almost 2000 pro-UK voters was conducted by Scotland Matters in conjunction with Think Scotland, Union Voice and The Majority to find out how much backing George Galloway’s Alliance for Unity tactical voting plan has.

Allan Sutherland, the founder of Scotland Matters, said: ‘If the Scottish opposition works together at the Holyrood in 2021 they can win and form a coalition. In fact, the theoretical maximum seats they can win is 88.

‘If they don’t, once again the SNP and Greens will win, even with a lower percentage of the vote and doom Scotland to at best another five years of incompetent government, Indy agitating, threat and division.

If we had asked 2000 No voters how they would vote in Indyref2 and got a 93% NO result that would not be a surprise and we could be accused of fixing the result but that is not what was asked’.

The participants were asked: If the Scottish opposition parties agreed to field only one ‘constituency’ candidate in the Scottish Parliamentary elections in 2021, would you support this and vote for the agreed candidate?’

The poll also found 70% said they would support any voting strategy “to get the SNP out”, suggesting that pro-UK voters want the UK parties to formally endorse tactical voting and to give guidance on how to vote in each constituency.

Mr Sutherland added: ‘The bottom line is 70% of anti-independence Scots want to vote tactically in a way that will get the SNP out, and 93% would do it if the opposition announced they are working together and made it clear who to vote for.

‘The average poll surveys around 1000 voters of which only around half would be pro-UK voters. Our survey covered just under 2000 pro-UK voters which is four times more than an average poll. We urge Douglas Ross, Willie Rennie and Richard Leonard to get behind this.

‘A “nod and a wink” unofficial gesture will mean thousands who want to vote tactically will vote for the wrong candidate and winnable seats – and the election, and Scotland – will be surrendered and lost to people whose main objective is the destruction of the UK’.

EDITOR NOTES: All media enquiries should be directed to info@scotlandmatters.co.uk

Survey questions are attached and link to the survey on Scotland Matters website can be https://scotlandmatters.co.uk/wp-content/uploads/2020/10/Summary-data-main-poll-21-10-20-23-45.pdf

CLICK HERE TO SEE THE FULL RESULTS OF OUR POLL

Sign up for our newsletter Here. Get the best news, features, articles and opinion straight to your inbox.