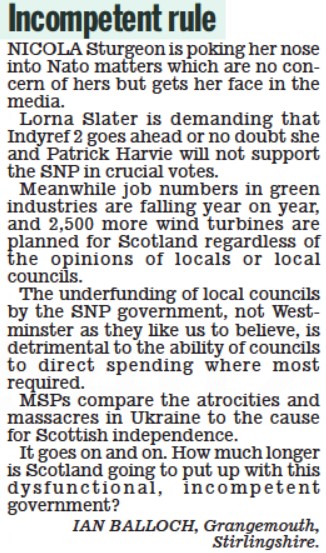 Nicola Sturgeon is poking her nose into Nato matters which are no concern of hers but gets her face in the media. Lorna Slater is demanding that Indyref 2 goes ahead or no doubt she and Patrick Harvie will not support the SNP in crucial votes. Meanwhile, job numbers in green industries are falling year on year, and 2,500 more wind turbines are planned for Scotland regardless of the opinions of locals or local councils. The underfunding of local councils by the SNP government, not West-minster as they like us to believe, is detrimental to the ability of councils to direct spending where most required. MSPs compare the atrocities and massacres in Ukraine to the cause for Scottish independence. It goes on and on. How much longer is Scotland going to put up with this dysfunctional, incompetent government? Ian Balloch, Grangemouth, Stirlingshire.

Ruth Marr (Letters, March 14) believes a second referendum to be scheduled for 2023. There are at least two things problematic about this. First, a second referendum has been promised “next year” every year since 2016. It seems it occupies a never-never land, perennially lust over the horizon, eternally out of reach. However, the main problem with a second referendum, should it ever happen, is: what would the pro-independence camp campaign on? The case for independence has not moved on since 2014, when it was decisively defeated. We still do not know how to bridge the £15 billion current account gap, what currency could be used, whether there will be a lender of last resort and how such an institution could be funded. There is no plan to deal with the capital flight that would undoubtedly occur. There is no idea how a border with England and Northern Ireland would work. There is no credible route to EU membership in less than a decade, probably longer. There is effectively no plan for independence beyond “it’ll be all right on the night”. So we move seamlessly from never-never land of promised referendums to cloud-cuckoo land of already-discredited claims and promises. Isn’t it time for Ms Marr and other disciples of the nationalist religion to look at the evidence and accept the facts: their god is dead, their faith is without foundation? Time to face reality and let politics return to solving our real problems in the here and now, to grow up and leave never-never land and cloud-cuckoo land to their natural realm of children’s fairy tales. Alex Gallagher, Labour councillor, Largs. 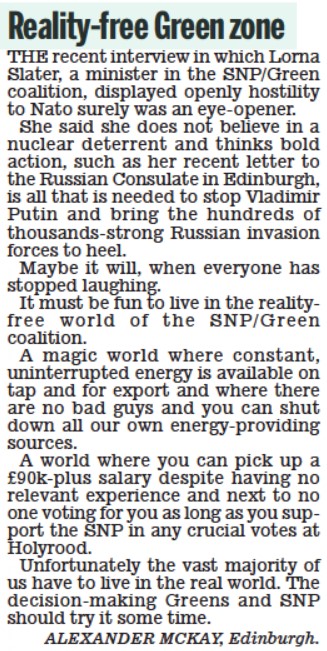 The recent interview in which Lorna Slater, a minister in the SNP/Green coalition, displayed openly hostility to Nato surely was an eye-opener. She said she does not believe in a nuclear deterrent and thinks bold action, such as her recent letter to the Russian Consulate in Edinburgh, is all that is needed to stop Vladimir Putin and bring the hundreds of thousands-strong Russian invasion forces to heel. Maybe it will, when everyone has stopped laughing. It must be fun to live in the reality-free world of the SNP/Green coalition. A magic world where constant, uninterrupted energy is available on tap and for export and where there are no bad guys and you can shut clown all our own energy-providing sources. A world where you can pick up a £90k-plus salary despite having no relevant experience and next to no one voting for you as long as you support the SNP in any crucial votes at Holyrood. Unfortunately, the vast majority of us have to live in the real world. The decision-making Greens and SNP should try it some time. Alexander McKay, Edinburgh. 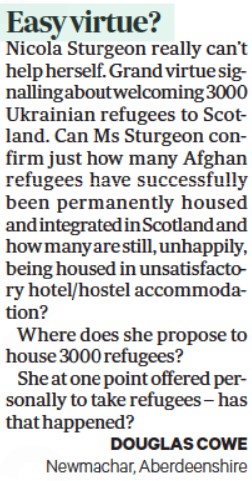 Nicola Sturgeon really can’t help herself. Grand virtue signalling about welcoming 3000 Ukrainian refugees to Scotland. Can Ms Sturgeon confirm just how many Afghan refugees have successfully been permanently housed and integrated in Scotland and how many are still, unhappily, being housed in unsatisfactory hotel/hostel accommodation? Where does she propose to house 3000 refugees? She at one point offered personally to take refugees— has that happened? Douglas Cowe, Newmachar, Aberdeenshire

Glasgow school performance ‘among worst in Scotland’ according to new...

SNP Government told to ‘up its game’ for not doing enough to protect...
Scroll to top