An English delivery driver working in Scotland has won £13,000 in a race discrimination claim after his boss called him an ‘English p***k’ and told him ‘you’ll be going back on the bus like your football team’.

David Hawksworth was subjected to a campaign of racial harassment by Scottish depot manager Patrick Murray, who ‘had a dislike of him’ because he was English and ‘spread lies about him being a sex offender’, Hawksworth claimed.

Within weeks of joining Greencore Food To Go, a food delivery company with a depot in Glasgow, Mr Murray called Mr Hawksworth an ‘English p***k’ and ‘English b*****d’.

Mr Hawksworth, who had moved to Scotland and had an obvious English accent, was also told ‘once Scotland gained independence’ that he would need to ‘go home’.

In another incident during the 2018 World Cup, Mr Murray told Mr Hawksworth that he would ‘soon be on the bus back to England like the football team’.

Now Mr Hawksworth has sued Greencore Food To Go for racial discrimination by harassment and unfair dismissal and won £13,306.

An employment tribunal heard Mr Hawksworth, who started as a delivery driver in April 2018, was left ‘offended’ and ‘violated’ by the racial harassment.

A tribunal report said: ‘Within a few weeks of starting work it became clear to him that the respondent’s depot manager Mr Patrick Murray did not value him.

‘On one occasion whilst using the forklift truck to load the vans, Mr Murray referred to Mr Hawksworth as an ‘English p***k’. Mr Hawksworth responded with ‘I beg your pardon’, indicating that he was offended and registering his objection.

Mr Hawksworth also accused Mr Murray of ‘spreading lies about him being a sex offender’ after Mr Hawksworth mentioned that he was due to attend court allegations of stalking that were ultimately dropped.

Another colleague, Craig Steen, was said to have called Mr Hawksworth a ‘paedo’ on rounds.

The relationship between Mr Hawksworth and the company broke down over time and he was signed off work for stress.

Mr Hawksworth took on a second job while off work, like others did at the company, but was summoned to a disciplinary hearing and sacked in August 2020.

Employment Judge Sally Cowen, sitting at a virtual Scottish employment tribunal, ruled that Mr Hawksworth was racially harassed on grounds of his nationality and unfairly dismissed due to a flawed procedure.

‘The tribunal is content that Mr Murray did say that Mr Hawksworth would soon be on a bus home to England, like the English football team.

‘Mr Murray did not deny saying it, but the only explanation he could give, was that it was said as banter.

‘Colin Lowe [a Greencore regional director] said that Mr Murray’s behaviour was unacceptable and the Tribunal agree with this view.

‘Furthermore, the tribunal consider that the comment was made due to Mr Hawksworth’s nationality and was offensive and demeaning to the claimant and violated his dignity.

The judge added that the harassment had an impact on Mr Hawksworth’s mental health, financial difficulties due to the prolonged nature of the offending.

She added: ‘The tribunal were satisfied that the acts of harassment amounted to a course of conduct by Mr Murray who did not like Mr Hawksworth and chose to harass him on the grounds of his nationality.’

Greencore Food To Go provide delivery services across the UK and have a depot in Glasgow.

Britain is a model to the world of a successful multi-ethnic society, a major review concluded last night.

It found no evidence the UK is institutionally racist – in a rejection of the common view among some activists – although there is evidence that ‘overt’ prejudice exists.

The Commission on Race and Ethnic Disparities, set up by Boris Johnson in the wake of the Black Lives Matter protests, concluded that although Britain is not yet a ‘post-racial society’, its success should be a model for white-majority countries. 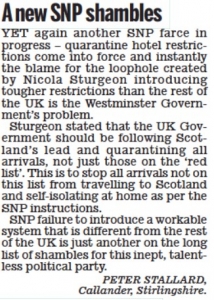 YET again another SNP farce in progress – quarantine hotel restrictions come into force and instantly the blame for the loophole created by Nicola Sturgeon introducing tougher restrictions than the rest of the UK is the Westminster Government’s problem. Sturgeon stated that the UK Government should be following Scotland’s lead and quarantining all arrivals, not just those on the ‘red list’. This is to stop all arrivals not on this list from travelling to Scotland and self-isolating at home as per the SNP instructions. SNP failure to introduce a workable system that is different from the rest of the UK is just another on the long list of shambles for this inept, talentless political party. PETER STALLARD, Callander, Stirlingshire.