BORIS Johnson has rattled the cage of the SNP. What the SNP fail to acknowledge is that they don’t actually want devolution to work. If devolution were a success, their argument for independence would be weakened. The last 13 years under the nationalists have seen them doing all they can to show devolution as ineffective. They have had the powers to improve life in Scotland, in our education system, health system and local authorities, yet they have failed to do so. Without devolution, who would the SNP blame for their own failures? Jane Lax, Aberlour.

SCOTLAND doesn’t have to look far for an “unlucky omen” – just look and listen to Deputy First Minister John Swinney when he appears on your TV screen. He reminds me of the late Rikki Fulton as Reverend I M Jolly in Scotch and Wry with his dryness when explaining anything to the Scottish public. He seems to be the Government messenger in breaking bad news, whether it’s anything to do with the coronavirus pandemic, educational issues or the handling of university students’ Christmas break. His latest escapade is dealing with the Scottish Government’s failure in handing over legal documentation on the botched complaints against Alex Salmond, which Swinney said he was not doing at this time. I am confident that Rev I M Jolly would have made a better job of it than this motley crew. Amen to that. Hamish Leishman, Kilsyth, Stirlingshire.

Newspaper letters pages and social media are abuzz with nationalist outrage at Alister Jack’s latest refusal to allow Indyref2, and glowing red with fantasy strategies for subverting the process. The same happened when George Osborne flatly refused to allow an independent Scotland to use the Pound The 2014 Indy campaign never recovered and all their ‘they canny dae that’ Section 30 bluster can’t hide the confusion and division Mr Jack has caused this time. And then along comes Sir John Major offering a ‘get out of Jail’ confirmatory vote which will encourage Scots to vote yes’ with their hearts, then waste years, and fuddle heads on interminable negotiations more aimed at winning the next referendum than agreeing on a robust treaty. The Government should turn the hose full on and publish the facts of Indyref life and Indy afterlife well before the Holyrood election, which looks like being a proxy Indyref. These ‘red lines’ should include what the question will be, who can vote, the threshold (two thirds, surely), that the UK wIll not be paying Scottish pensions, there must be a border before and after Scotland Joins the EU (if it can), the right of pro-UK voting council areas to stay in the UK, and the loss of UK citizenship and how to re-apply. Can anyone imagine Spain, Germany, Italy or the USA making it so easy for Bavaria, Catalonia, Lombardy or California to leave and break up their hard-won successful countries? Allan Sutherland, Stonehaven

Michael Gove has repeated the mantra of a Scottish independence referendum being once in a generation. He is quite right to take this viewpoint. The SNP is quick to say independence is now the “settled will” of the Scottish people. How can anyone say that after a few months of poll leads after decades of trailing behind? In particular, at this moment in time with the effects of the pandemic overshadowing everything else, this is a particularly vacuous statement. If independence is really the way forward then it will still be the case in 20 years’ time. If it is just the younger Scots who want this why not wait until the older generation has passed on? Independence will by its wry nature bring huge problems. If the population is all for it, it might work. If a large percentage feels alienated it certainly won’t. Dr Gerald Edwards, Glasgow G77.

Meme of the Week

Scotland Matters has a Paypal page for donations. We have a number of costs to meet every month and wish to expand our operations in the future.

No donation is too small and they will all help us meet our objectives and hopefully take independence off the agenda in the next Scottish Parliament.

Letters to the Press

Headline of the Week 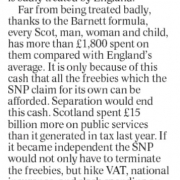 ACCORDING to Leah Gunn Barrett (Letters, November 9) “Scotland does not have a deficit”. According to the Institute for Fiscal Studies, Scotland’s deficit will reach 28 per cent of GDP in 2020- 21. Ms Barrett, like all nationalists, makes the false claim that Scotland is badly treated by England. Far from being treated badly, thanks to the Barnett formula, every Scot, man, woman and child, has more than £1,800 spent on them compared with England’s average. It is only because of this cash that all the freebies which the SNP claim for its own can be afforded. Separation would end this cash. Scotland spent £15 billion more on public services than it generated in tax last year. If it became independent the SNP would not only have to terminate the freebies, but hike VAT, national insurance, and slash spending on the NHS, the police, education, and transport. We would really know the meaning of austerity then. The nationalists know this but they ignore it. It’s time for them to tell the truth to the people. William Loneskie, Lauder. 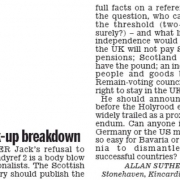 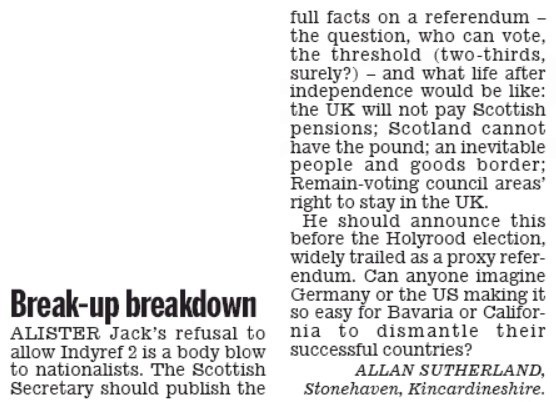 How dare Nicola Sturgeon sermonise on Twitter about the importance of respecting democracy, in support of her demands for indyref2. Referencing the US election, the SNP leader rightly observes that “power doesn’t belong to politicians — it belongs to the people”, She is a lifetime career politician who, since it became clear on 19 September 2014 that she’d lost the“once ina generation” independence referendum, has campaigned virtually daily for its rerun. 84.6 per cent of us- that’s us “the people” whom Ms Sturgeon claims so much to respect—voted, with a clear majority rejecting her separatist dreams.

Ms Sturgeon is therefore, I suggest, a democracy denier. She has zero right to virtue signal on respecting democratic principles and process. Beyond double standards. 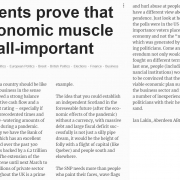 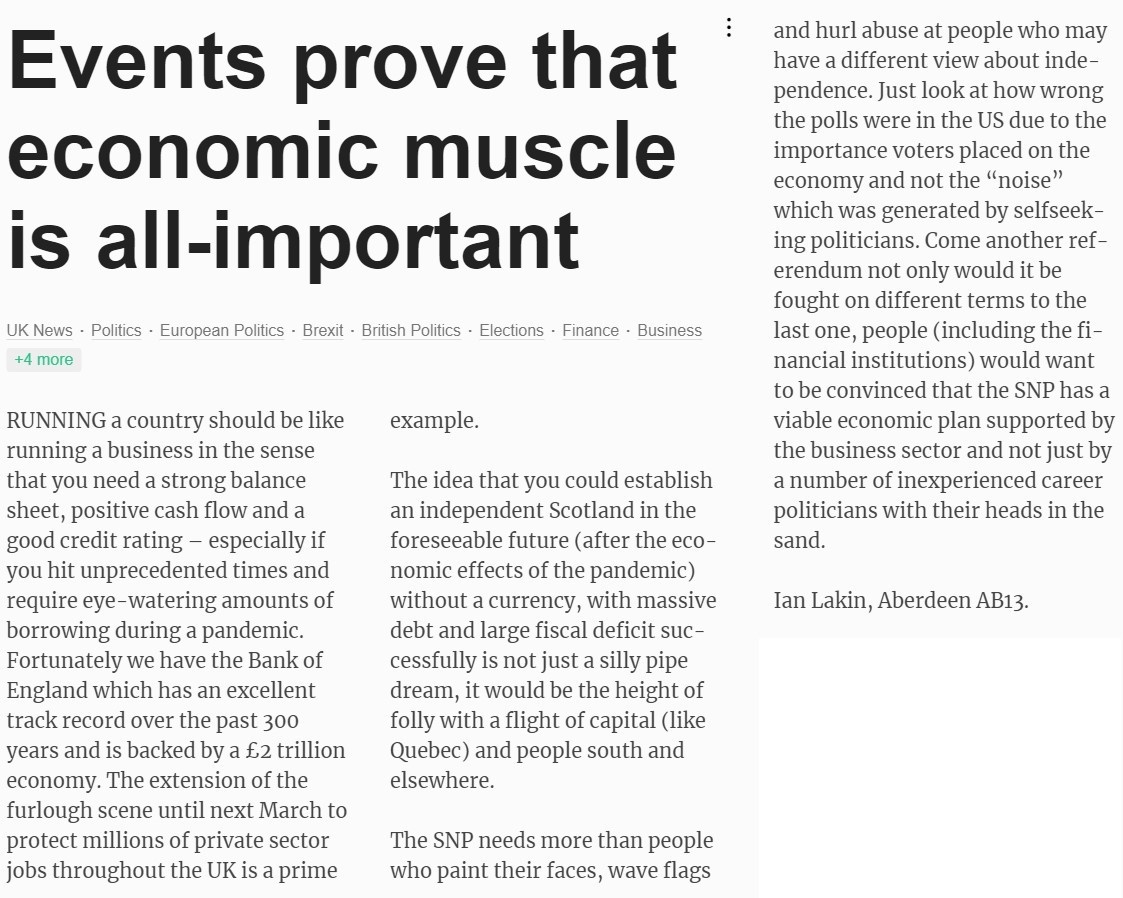 RUNNING a country should be like running a business in the sense that you need a strong balance sheet, positive cash flow anda good credit rating — especially if you hit unprecedented times and require eye-watering amounts of borrowing during a pandemic. Fortunately we have the Bank of England which has an excellent track record over the past 300 years and is backed by a £2 trillion economy. The extension of the furlough scene until next March to protect millions of private sector jobs throughout the UK is a prime example. The idea that you could establish an independent Scotland in the foreseeable future (after the eco- nomic effects of the pandemic) without a currency, with massive debt and large fiscal deficit suc- cessfully is not just a silly pipe dream, it would be the height of folly with a flight of capital (like Quebec) and people south and elsewhere.

The SNP needs more than people who paint their faces, wave flags and hurl abuse at people who may have a different view about independence. Just look at how wrong the polls were in the US due to the importance voters placed on the economy and not the “noise” which was generated by selfseek- ing politicians. Come another ref- erendum not only would it be fought on different terms to the last one, people (including the fi- nancial institutions) would want to be convinced that the SNP has a viable economic plan supported by the business sector and not just by a number of inexperienced career politicians with their heads in the sand.