It’s hardly surprising that the SNP focuses its election fight on independence. After 14 years in government, they could hardly fight on their record of failure in education; failure to deliver the Sick Kids hospital on time or on budget; £40 million lost on Prest-wick Airport; millions lost on BiFab; E100m overspend on ferries yet to sail; flawed and expensive farm subsidy system; late and expensive social security system; the worst record on drug deaths of any country in Europe. On top of this, they have under-funded local authorities for years. Even the failing Scottish Qualifications Authority would award them a D- minus. BRIAN BARBOUR Jim Bush Drive, Prestonpans 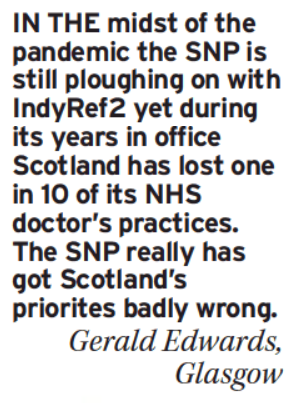 IN THE midst of the pandemic the SNP is still ploughing on with IndyRef2 yet during its years in office Scotland has lost one in 10 of its NHS doctor’s practices. The SNP really has got Scotland’s priorities badly wrong. Gerald Edwards, Glasgow 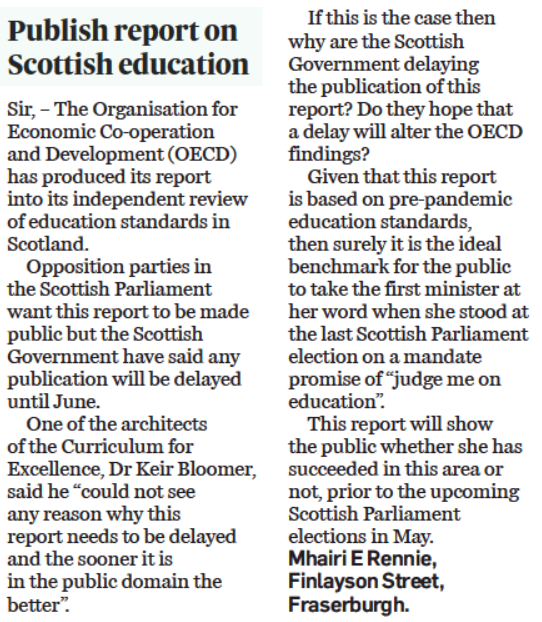 Sir, – The Organisation for Economic Co-operation and Development (OECD) has produced its report into its independent review of education standards in Scotland. Opposition parties in the Scottish Parliament want this report to be made public but the Scottish Government have said any publication will be delayed until June. One of the architects of the Curriculum for Excellence, Dr Keir Bloomer, said he “could not see any reason why this report needs to be delayed and the sooner it is in the public domain the better’: If this is the case then why are the Scottish Government delaying the publication of this report? Do they hope that a delay will alter the OECD findings? Given that this report is based on pre-pandemic education standards, then surely it is the ideal benchmark for the public to take the first minister at her word when she stood at the last Scottish Parliament election on a mandate promise of “judge me on education’: This report will show the public whether she has succeeded in this area or not, prior to the upcoming Scottish Parliament elections in May. Mhairi E Rennie, Fintayson Street, Fraserburgh.