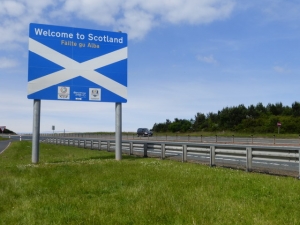 We are now into the second decade of SNP government in Scotland, so have they been some species of Tartan Titan that has rid us of all our ills? Have they maintained our world-renowned educational standards, unified the nation behind their policies, strived for cross-party cooperation, made Scotland a better, freer and more friendly place to live?

In the words of Music mogul and high waisted trouser wearer Simon Cowell, ‘It’s a no from me’.

The elephant in the room for most of us is still the debate over Scottish independence. Despite the once in a generation promise, its pervasive influence can be felt by all of us all. Despite the price of oil plummeting, despite brexit, despite covid-19 and despite the fact that there is no demand for one, the SNP are still determined to hold indyref2 at some point in the near future. Only the most zealous and irrational of nationalists even want to see a rerun of 2014 anytime soon. No one else does.

For me, this will be the sole legacy of the SNP. You can forget about their policies on public health such as the smoking ban and charging people for plastic bags, both policies that I agreed with. The only legacy they will have for a majority of Scots will be the gaping divide in Scottish society that they intentionally created and have never made an attempt to cauterise. They are quite happy for this wound to bleed as long as it gets them votes. The concerns of the nation are secondary.

Even the way that we vote now reflects the ‘Ulsterisation’ of Scotland’s political and cultural landscape. Identity politics is now the new normal in Scotland and identity politics is far more tribal and personal than the old left-right dichotomy that existed a decade ago. Just look at the examples of nationalists destroying signs from other political parties. This just didn’t happen a decade ago. The SNP have let loose an army of zealots, armed them with ideological weapons and sent them into battle. Now they have gone rogue and are more of a liability, but they can’t just be marched back into barracks anymore.

Unfortunately, Scotland is now riddled with such insidious nationalism. I have previously written about how Scotland has been transformed into a country that I no longer recognise in a remarkably short space of time. In the years since I wrote that article, my fears have not been allayed. Their assault on the British Transport police and the proposed merger with Police Scotland is purely politically motivated and is actually putting public safety at risk according to the British Transport Police themselves. It makes sense to have an integrated and specialist transport police. Transport networks tend to cross regions and have different emergencies and scenarios from ‘regular’ policing. I expect if they were originally known as the ‘Scottish Transport police’ the merger wouldn’t be going ahead.

Have the SNP fared any better on the cultural arena? At the Edinburgh Fringe in the last couple of years, I could see no satire on the SNP. I thought this was odd. There was certainly much satire on the other political parties along with a smattering of the usual street ‘performance’ (Why no, I don’t want to watch a gritty urban-feminist retelling of A Tale of Two Cities set in Shoreditch). Why are the SNP above this? Well, apart from the fact that satire is a distinctly British form of humour and a way of sticking two fingers up at the establishment, this quote sums up the cultural situation in Scotland up:

Culture and education are being weaponised by political voices. There is collusion between some artists and writers and some political journalists. One of the most prominent, Joyce McMillan of the Scotsman, claimed during the referendum campaign that she knew very few Scottish artists (or was it none at all?) who supported the continuation of the UK. But it is not only journalists who are cosy with our politically driven writers; It is government ministers too. A row erupted a few years ago after teachers expressed anxieties that the then education minister was interfering in the curriculum to force pupils to study more Scottish, rather than English literature. Teachers were complaining that they were being railroaded into abandoning Shakespeare and Dickens in favour of ‘dire’ modern Scottish works. (https://www.spectator.co.uk/2016/08/tartan-ing-arts/ )

In much the same way that the second Iraq War has now soured the achievements of Labour under Tony Blair, the SNP is leaving a similar poisonous legacy in their monomaniacal obsession with independence and letting their more corrosive and controlling instincts dictate cultural policy.

What about their impact on everyday life? The SNP are well on their way to destroying the link between taxation, responsibility and the notion of a service being ‘free’ at the point of delivery. You can now have a baby in Scotland and not even prepare for it. You don’t even have to make the effort to buy its first romper or pack of nappies anymore. Even its first book is provided by the Scottish Government. This isn’t as, Nicola Sturgeon says, a ‘strong signal of our determination that every child, regardless of their circumstances, should get the best start in life’, it seems like a gross dereliction of duty as a parent to me.

In an interesting side note and related to the SNP controlling culture, every baby box comes with a poem, written in ‘Scots’ by the Makar:

At last you are here in the wurld

And wi’ aa your wisdom

Your een bricht as the stars,

You’ve filled this hoose with licht,

My cherished yin, my hert’s ain!

O my darlin wee one

Ye are my bonny blessed bairn,

I’ll just leave that there. You’re intelligent enough to draw your own conclusion(The above two paragraphs nearly made my spellchecker have a meltdown as well).

Related to this erosion of personal responsibility, even for your own offspring, allow me to relate a short anecdote. I was in the local pharmacy looking to buy some anti-histamine. Like many ‘on the shelf’ drugs they were very cheap and I was working full time. I didn’t mind paying for them. Upon approaching the counter the pharmacist gently accosted me and said, ‘Why are you paying for these, just go to the doctor, you’ll get them for free’. And there was the SNP economic and social philosophy all in one short sentence.

They’re not entirely responsible for this, but they have to take a good portion of the blame. And this is now where you get accusations of being a ‘torriee’ in Scotland or a ‘red torie’ now. The SNP have distorted politics so much that large swathes of the population now consider everything they get as being ‘free’. They have been blinkered to the hard work of their fellow citizens, the corporations that are domiciled in the UK that pay about £68 billion a year from corporation tax (Yes, I know corporate tax avoidance is an issue) and business rates and who also employ people who pay tax and NI as well.

For example, the minor ailments service in NHS Scotland dispensed 463,949 prescription of paracetamol and 151,475  prescriptions of ibuprofen in 2015/16. Surely these are the types of medication that shouldn’t be provided by the state? I’m glad that the majority of us wouldn’t even waste the doctors time, but clearly many in Scotland now consider it their right to be provided with a ridiculously cheap drug that can be bought at a local corner shop for the price of a chocolate bar.

Ironically, Scotland under the SNP spends almost £15 billion per year more than it generates in tax, and the SNP are in the perverse and frankly ludicrous situation of destroying and denigrating the union that makes all their ‘freebies’ possible in the first place.

They are also equally bi-polar when it comes to the relationship with Europe. Quite how the 60 million people in England, Wales and Northern Ireland are ‘foreign’ to me, despite sharing the same philosophical, religious, cultural and linguistic background as me, but the European Union is not, is difficult to comprehend.

Now let’s look at the education system in Scotland. It used to be world-renowned. Second to none. It still is, particularly in the fields of medicine and law. To look at a roll call of Scottish inventors is to look at men who created much of the modern world:  Alexander Graham Bell, John Logie Baird, Alexander Flemming, Kirkpatrick Macmillan (Inventor of the pedal bike. That might not seem like much, but no other invention has allowed people to travel as far and as cheaply) James Goodfellow (Inventor of the technology behind the PIN code and ATM). In science and philosophy,  Scotland produced such luminaries as James Watt, James Clerk Maxwell, Adam Smith and David Hume.

Well, according to The Programme for International Student Assessment, Scotlands  Overall, education ranking has dropped from 11th to 23rd for reading since 2006, from 11th to 24th for maths and from 10th to 19 for science. Often, these damning statistics are exacerbated by bureaucracy and the constant chasing of ‘outcomes’ that teachers must achieve rather than actually educating children. The fact that education spending fell by 8% in 2010-2014 in Scotland, despite rising in England won’t have helped either. For a party that seems so utterly obsessed with children, this seems a bit of an oversight.

As David Hume once said ‘a wise man proportions his belief to the evidence’ and on this basis, Salmond’s and Sturgeons Scotland is a disaster or if I’m in a less belligerent mood; it hasn’t lived up to the lofty ideals set out by the SNP.

To be fair this was always going to be a tall order. If the SNP are to believed Scotland should have been a utopia by now after ten years of their glorious and benevolent leadership. Of course, the usual tired platitudes of it being ‘Wastemonster’, Tories, Brexit, Thatcher, The Union, or anything else that it’s politically prudent to blame will be thrown around, but they have to take the largest share of the blame.

If Scotlands’ issues are long term and endemic then say so and manage expectations better. There was some movement in this direction, with the First Minster stating that Scottish independence is no ‘magic solution’, but it looks like she has been backsliding on this since then.

So have the SNP been stronger for Scotland? Allow me to give the SNP the same decision that I made in 2014: No.