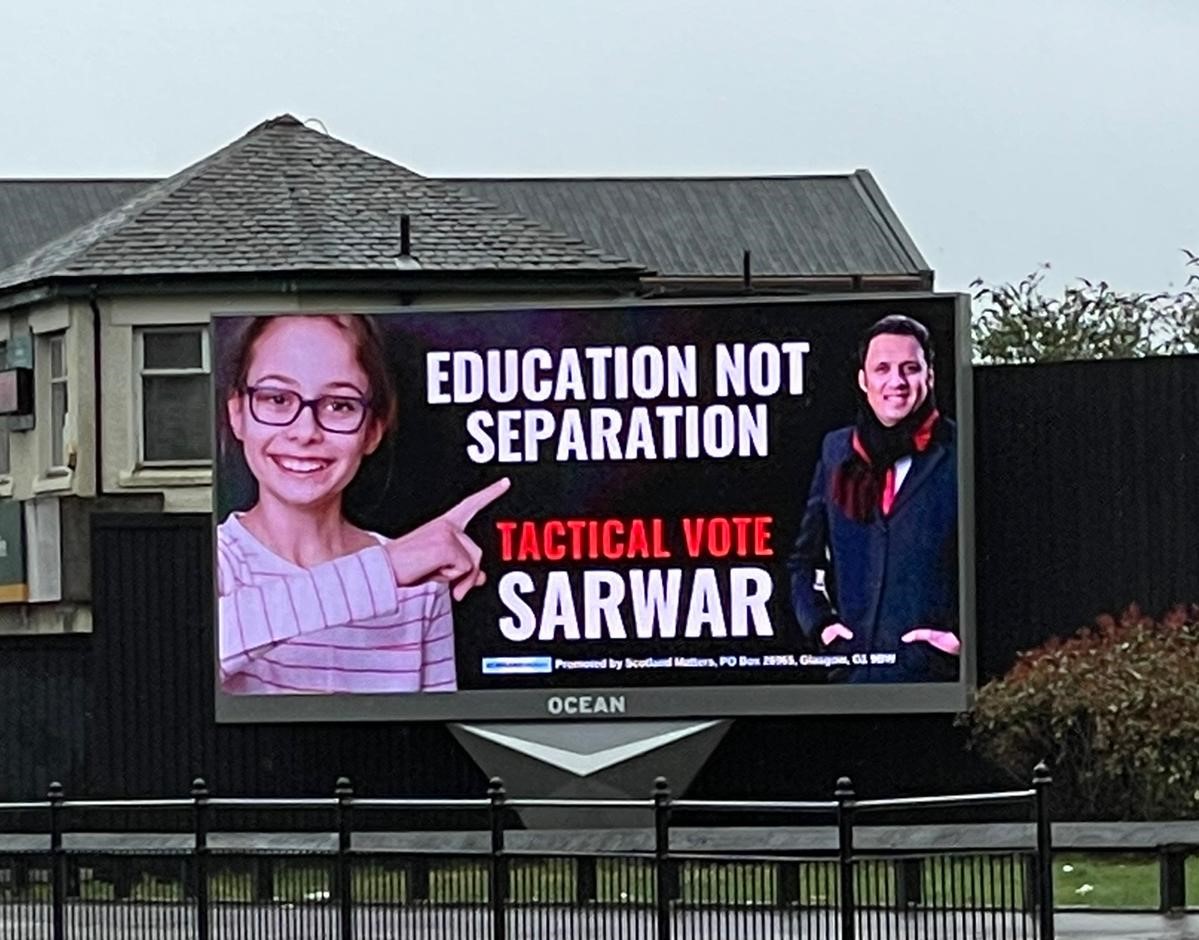 SECOND BILLBOARD CALLING FOR VOTERS TO BACK ANAS SARWAR REVEALED

Scotland Matters has erected another billboard calling for voters to vote tactically for Anas Sarwar and oust Nicola Sturgeon from her constituency.

The billboard is part of a wider tactical voting campaign backing Anas Sarwar in Ms Sturgeon’s seat. Thousands of voters in the Southside constituency have also been reached with paid-for social media posts.

The new image is entitled “Education not Separation” and focuses on the SNP’s failed education policies.

Scotland Matters, the Electoral Commission registered campaign group, was also instrumental in the #ResignSturgeon billboards along with The Majority and UK Union Voice, and additional billboards in Inverclyde calling for the SNP to concentrate on “Vaccination and not Separation”.

Allan Sutherland, Scotland Matters Director and spokesman, said: “This is the second in a series of billboards we will be erecting across Scotland in support of pro-UK parties and their candidates.

“Scotland needs to focus on what matters: health, jobs, education, and housing; not separation and we urge people to vote tactically for the pro-UK candidates most likely to best the SNP/Green candidate and avoid splitting the vote.”

This is the first time in British history that two party political leaders have gone head-to-head in a constituency in a major election. Scotland Matters are working to encourage and help pro-UK parties to get the SNP/Greens out of Government in the 2021 Holyrood elections and are advocates of tactical voting to achieve this.

Scotland Matters believes that many ‘No’ voters will back Anas following a YouGov survey showing 550,000 voters across Scotland are considering voting tactically against the SNP. That is around 22% of the Scottish electorate.

According to research by the Electoral Commission, 24% of Scots tactically voted in the 2017 General Election resulting in 21 SNP MPs losing their seats.

Mr Sutherland added: “If we can persuade five percent of voters to vote tactically in the constituency part of the Holyrood Elections there is every chance many SNP constituency seats will fall. As our YouGov poll showed, there is a growing determination among pro-UK people to tactically vote against the SNP.”